Inspired from the pages of The Name of the Wind ™ and Wise Man's Fear™ by Patrick Rothfuss comes The Tehlu's Iron Wheel™ Necklace. Skillfully crafted in solid iron, each pendant is carefully hand finished and individually inspected for the highest quality by the Badali Jewelry artists. The Iron Wheel Necklace is an officially licensed Kingkiller Chronicle replica through Patrick Rothfuss. Mr. Rothfuss actively participates in the design process for each piece of jewelry for this licensed line.

The Black Iron Wheel is the primary religious symbol of the Tehlin™ faith in the Four-Corners world. According to The Book of the Path, demons infested our world until Tehlu came forth to drive them from the world. The greatest of these demons, Encanis™, was chained to a great iron wheel and then thrown into a pit of fire. In doing this, Tehlu ended the rule of demons over men, but also sacrificed his mortal form. The iron wheel is inscribed with the names of Tehlu's angels and is believed to protect the wearer from demons and other dark forces that would prey upon mankind. The character Chronicler wears a Tehlu's Iron Wheel necklace throughout the Kingkiller Chronicle. Kvothe™ uses the massive iron wheel from the Tehlin church in Trebon™ to kill the draccus™ that is destroying the town in the first book of the series, The Name of the Wind™.

The Tehlu's Iron Wheel pendant is cast in solid iron and the edge of the wheel is engraved with the names of Tehlu's angels: Kirel™, Deah™, Enlas™, Geisa™, Lecelte™, Imet™, Ordal™ and Andan™. The Iron Wheel of Tehlu measures approximately 30 mm (just over 1 3/16") in diameter and weighs approximately 7.7 grams.

Includes your choice of a 24" long brown leather cord or a 24" long stainless steel curb chain. A 20" sterling silver box chain is available for an additional $12.00.

Note: Prolonged exposure to water or moisture will cause iron to rust. Rust can be removed from your iron wheel pendant by rubbing it with cloth dipped in any form of vegetable oil. 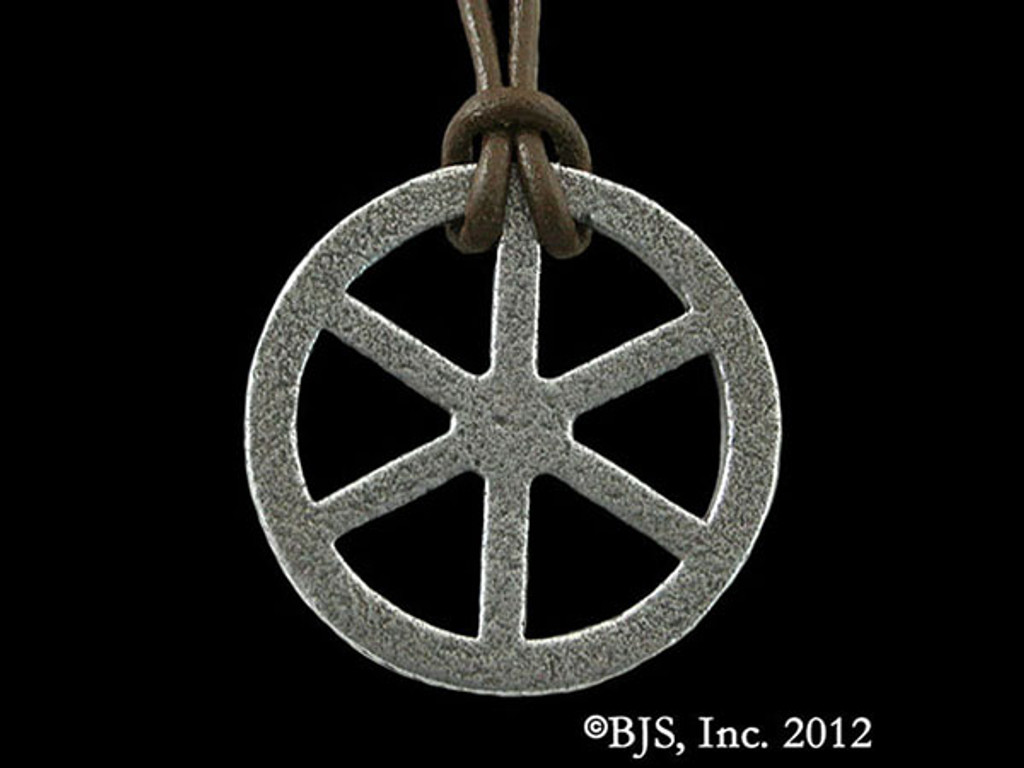 Create an account with us and you'll be able to: